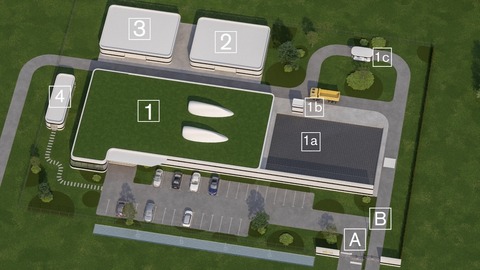 We all know that CO2 is bad for the planet, so we are prone to greener solutions. One of the easiest ways to reduce carbon emissions is to consume less power. Or, we can even change fuel or electricity-driven devices for the ones that run on human power.

Japan is a great example of reducing CO2 emissions by choosing bikes over cars. The other option would be electric cars, although even electrically-driven vehicles are, contrary to public belief, not carbon emissions free.

Why is that so? Carbon emissions are calculated specifically. Included are all the phases, from the beginning of the process to the end, not just the productions stage. Where does creation of an electric car physically starts? It begins with raw materials.

Because a car is made of a many parts, we have to take into consideration a lot of different materials. That is, if we want to know the real carbon emission of the whole car, we have to trace treatments of every possible material that the car is made of – back to its very beginnings.

Let´s take car tires. They are made of five major components, with rubber being the most important one. Surprisingly, for making a tire we need, among other four components, quite some oil. According to the standard norms, we would need about seven gallons of oil to produce one tire.

We mentioned a tire and its five basic raw materials. Let´s choose one of them, oil, and trace it from the beginning to the end. How is oil “produced”? It all begins with drilling a well into an underground reservoir in a desert, on the sea, and similar. After that, the petroleum needs to be extracted, refined, and transported to the location where a part is used for the tire itself and another part to support the process.

After mixing all components together, the tire is made. But we are not done yet! For precise calculations of carbon emissions, we want to know the whole life cycle of the tire including storing, possible servicing during usage time, and all the way to the dumping the tire.

Every above-mentioned phase takes some work, and (almost) every work is somehow connected to power consumption – and therefore carbon emissions.

Now, we did the procedure for one part of a car. OK, it is not one part but four because the car uses four tires. But imagine doing this for every part of the car. And this is only the first part; after definition we have to calculate the emissions.

Luckily, we don´t have to figure out and calculate all the stuff. Experts have done the job and prepared some very long and confusing calculations. They are known as LCA (Life Cycle Assessment or Analysis).

LCA takes into consideration carbon emissions that are results of all stages: the ones during manufacturing together with the pre-manufacturing stages and the ones after the product is shipped from the factory.

If we go back to electric car, we see that is not carbon emissions free at all. Even your bike is not as strange as it sounds. (Because many parts were put together by using power. For example, they were transported with cars that polluted the air.)

We have to know that factories are very motivated to reduce carbon emissions, because they have to comply with the regulations. When the factory exceeds the permitted amount of CO2, penalties have to be paid.

One of the most traumatic phases of the product life-cycle is the last one – dumping worn out products. This is, obviously, a problem with many participants involved: manufacturer and his business partners, consumer, municipal authorities…

The most common solution is still burning wasted products or burying them under the ground. Believe it or not, these are the “good” solution. The very worst one is disposing discarded product in the wild or at sea.

How about recycling? Wouldn’t that solve the problem? We are not even close to the workable solution. According to OurWorldInData.org, we produce more than 380 metric tons of plastic yearly. More than half of plastic waste from around the world was discarded. From the rest of 45%, 25% of it was burnt and only 20 percent was recycled.

What does this tell us? Trying to figure out a better recycling system is not the solution. Finding a method to deal with the rest of 80% of waste is the right way to focus our thinking on!

Project Phoenix8 and Roberto Hroval: A Smart way to not only reducing CO2 but to dealing with discarded products as well

Luckily, some good solutions have already been discovered. One of the most promising is a ground-braking technology known as Product Reincarnation Technology™. This is actually a big plant that is “having garbage for breakfast and delivering fuel or electricity by launch.” It produces no emissions, so it is totally green.

What is going on in the reactor of Product Reincarnation Technology™? Discarded products are degraded into basic elements. Low temperature is used; therefore, the process requires less energy. The elements that come out are very clean and don´t need any additional processing.

Remember the tires we were talking about? They are more than suitable for this process. Roberto Hroval, founder of Project Phoenix8 and chairman of the company behind, PP8 Corporation, UK, is very optimistic: “We are preparing for building the first official plant in Europe. After finishing it, we will invite people from other countries to verify the process and the results. They will be shocked by efficiency; I can tell you that.”

One of the reasons why Roberto Hroval is so confident about Product Reincarnation Technology™ is the fact that the world´s most renowned company for testing and inspecting, Switzerland´s Bureau Veritas, confirmed the results. Product Reincarnation Technology™ monetizes 98% of waste with more that 85% of energy efficiency! It is self-sufficient plant that produces almost no noise.

“We put out sweat and blood into this technology. Not to mention eight years of work and more than seven million dollars,” Hroval announced.

After passing the alfa and beta stages of development, Project Phoenix8 is ready to hit the market: “We found an innovative way to go public – via cryptocurrency. I grew up in a poor family and had no chance to participate in any big projects. I also noticed that the best projects are always somehow reserved for the elite like VCs and banks. So, we decided to offer one of the most potent projects and offer it to people directly. Building our own cryptocurrency allows us to dose.”

Roberto Hroval is no stranger to the business world. Many influential media from all around the globe wrote about him and his projects; especially about the ones connected with green energy: University of Oxford, Nature.com, Academia, Harvard University, and more than 2.000 online media portals.

Roberto Hroval´s career started more than 25 years ago. As a researcher, innovator, and businessman he accomplished very much. “But Project Phoenix8 with Product Reincarnation Technology™ inside is my biggest and most potent project so far. It can be applied everywhere in the world. It will create green jobs, take care of discarded products, and help to reduce CO2 emissions. Last but not least, the project is also very profitable. We are expecting at least 1,5 billion dollars in the next years from it. And I will be happy to share the profit with investors or contributors, of course.”

記事検索
ギャラリー
最新記事
Best food truck offerings in Mumbai that will delight your taste buds
Dhoni.Army Is On Auction On GoDaddy & The Minimum Bid Is Making People Go Crazy…
How to build a healthy customer relationship in 2020
COST OF A COW OF USA
How to build a healthy customer relationship in 2020
Socioeconomic Benefits of Transportation
Roberto Hroval, “Project Phoenix8”: A Smart Way to Get Alternative Energy
Do you need a boat license to run jet ski?
How to pick out a shoe that will actually last
Who are History’s Longest Reigning Monarchs
ギャラリー
人気記事(画像付)
アーカイブ
January 2020
December 2019
August 2019
July 2019
June 2019
カテゴリー
Lifestyle (1)